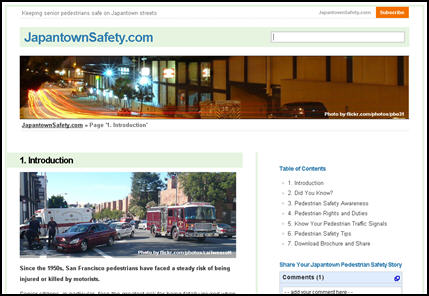 Minami Tamaki LLP recently settled a wrongful death claim for the family of Kenji Suzuki, a former Marine who died from injuries after being run over by a MUNI bus near Japantown.

On January 11, 2007, Suzuki was walking in a crosswalk while the light was green at the intersection of Geary Boulevard and Fillmore Street when he was struck and run over by a MUNI bus whose driver ran the red light.

Suzuki suffered major injuries and died five days later at San Francisco General Hospital at the age of 69. Suzuki’s mother, 94-year-old Masako Suzuki, lost her primary caregiver. “Kenji was a wonderful son and did so much for our mom,” said sister Helen Sato of San Francisco.

MT partner Dale Minami represented the family and noted that Suzuki’s accident was part of an unfortunate pattern of pedestrian deaths and injuries in Japantown.

“There are just too many incidents of pedestrians with the right-of-way being hit by vehicles,” said Minami, who has handled a large number of similar cases. “Many senior citizens may believe that drivers will stop for them at the red light but too many drivers are simply not paying attention or are speeding.”

The family and MT donated part of the settlement to create a website, JapantownSafety.com, and a pedestrian safety brochure about traffic and pedestrian safety awareness that was circulated to Japantown residents and visitors. The information brochure was also translated into Japanese. Sato hopes her family’s loss does not happen to any other people.

“Our family will always have to live with the pain of Kenji’s tragic accident,” said Sato. “The best thing we can hope to do now, in Kenji’s memory, is to get the word out to others that pedestrians and drivers need to be more careful. Pedestrians should never just assume that drivers will stop, even if the pedestrians are walking in a crosswalk with a green light.”